Educating for Peace – An excerpt from PIVOT

Excerpt from Chapter 2, "World Peace is Possible ... If We Make it Profitable" 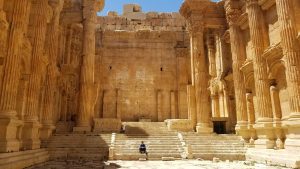 Chapter two begins in Iraq with Ravi working with four students from Mosul just released by ISIS days before. He then goes to teach in Beirut, Lebanon, and during a dangerous excursion to Baalbek on the border of Syria, he encounters Hezbollah while trying to avoid ISIS, which is where the excerpt below begins.

As we crossed from the Christian to the Muslim side of the Beqaa Valley, we were stopped by an armed soldier standing on the side of the street. He spoke briefly to my driver in Arabic and then got into the front seat of our car. No one acknowledged me in the back, but I was quickly becoming very aware of the Mother Mary pendant hanging from the rearview mirror as we drove away. These two would not even agree on the same God! My heart pounded rapidly.

They spoke animatedly in Arabic, and I wondered what the conversation was about. Did they realize I was an American? Were they negotiating a deal for my being taken as a hostage? Twenty minutes later, we pulled over to a little hut on the side of the street, and the soldier got out. He tapped on my window. I reluctantly rolled it down and attempted to crack an innocent and friendly smile when he asked, “Café?”

While I was trying to determine the best answer, another man approached the car, waving what appeared to be the Hezbollah flag. It turned out to be a Hezbollah T-shirt, which he was hoping to sell me. Who knew these “terrorists” were so enterprising? I gently shook my head, keeping my mouth shut to hide my American accent. By doing so, I politely declined the coffee and T-shirt (which would have been a fantastic souvenir except for the stress of trying to pass it through US customs!), so my driver restarted the car, and the two of us resumed the journey. Sensing my great relief, he made eye contact with me in his rearview mirror and said,  “Don’t worry. He is Muslim, and I am a Christian. But first, we are both Lebanese.”

In retrospect, I believe the solider was just getting a ride from one checkpoint to the next, but this simple yet profound statement of unity encapsulated many life lessons. My own implicit bias, to begin with, had me wondering if I was the subject of a negotiation. Had I been more open-minded, I might have saved my heart from skipping a few beats. Fear can cause irrational behavior, and when the fear is unjustified (as is often the case in racial and cultural conflicts), the consequences can be unnecessarily harmful.

However, the more global lesson is that if such drastic differences can be overcome between Muslims and Christians, why can’t Democrats and Republicans remember we are all first Americans? Can we teach this to Hindus and Muslims, Israelis and Palestinians, Iraqis and Kurds, Russians and Ukrainians, Straight and Gay, and Black and White? Yes, we can. Cultural competence can and must be taught, and this can be done by first exploring commonalities and then provoking curiosity and civil conversation about our differences.

We soon arrived in Baalbek, and I felt as if I had stepped into a time machine. This city of massive ruins was nothing short of awesome, yet it was also eerie and uncomfortable because no one else was there. Due to the warnings about ISIS and Hezbollah, Baalbek had pretty much become a ghost town. After two hours of walking and climbing through sweltering heat, I sat alone for almost an hour in the ancient and majestic Temple of Bacchus. Its beauty, size, history, and sheer peacefulness mesmerized me, though I was intellectually aware that I was also in one of the most dangerous parts of the world.

While contemplating the juxtaposition of these two realities, my serenity was interrupted by modern technology—breaking news buzzing on my cell phone. Violence had erupted, but it was domestic terrorism on the other side of the world. Ironically, it was happening in my hometown of Charlottesville, Virginia, USA.

On August 12, 2017, white supremacists from Ohio traveled to Charlottesville to protest the removal of Confederate statues. One of General Robert E. Lee sits in our city’s center. The protestors were also gathering to unify the American white nationalist movement when one of them drove his car into a crowd of counter-protesters. A 32-year-old woman was killed, and two responding police officers also perished in a helicopter crash.

Best known for being the home of three American presidents (Thomas Jefferson, James Madison, and James Monroe), along with Jefferson’s University of Virginia, “Charlottesville” has now become a metaphor for white supremacy and racial tension. How ironic that I was having one of the most peaceful days of my life in what is thought to be the most radicalized part of the world when radicalism was unfolding on my doorstep at home.

I returned to Charlottesville from the Middle East with three strong beliefs:

As idealistic as “educating for peace” sounds, it is now pragmatic. I believe we will witness the unprecedented simultaneous rise of Gross Domestic Product (GDP) and unemployment as technology replaces human workers, along with some type of Universal Basic Income (perhaps in the form of a zero or negative tax rate) to keep the consumer-driven economy afloat. If anticipated by education, the significant amount of human capital released from...

The chapter continues, explaining how technology will redefine society, exploring ways to teach peace, as well as how we can make peace profitable.

#mc_embed_signup{background:#fff; clear:left; font:14px Helvetica,Arial,sans-serif; }
/* Add your own Mailchimp form style overrides in your site stylesheet or in this style block.
We recommend moving this block and the preceding CSS link to the HEAD of your HTML file. */ 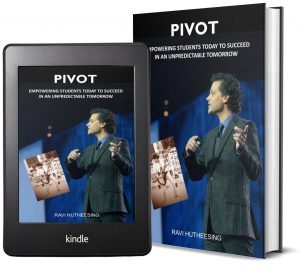