How to Pivot Privilege into Racial Justice

How to Pivot Privilege into Racial Justice 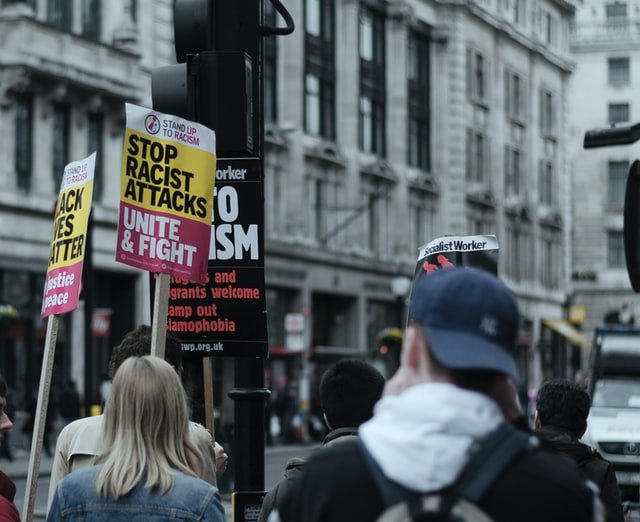 Mainstream media broadcasts, social media posts, and many voices advocating for racial equality often point to white privilege as being complicit in social injustice, especially racism.  In many cases, white privilege is spoken of only in the negative.  However, people are less likely to create real change from feelings of guilt or shame than they are from a place of empowerment.  Privilege does not have to be a bad thing when it is used to empower people to educate themselves and others.  In fact, I think it needs to be seen as a potential power for good.

Pivoting from Guilt and Shame to Bold and Empowered

In the fight against racism, many of those with privilege (be it white or any other form of privilege) are made to feel guilty for having it. This can lead to defensiveness in the form of backlash, or silence and complacency which is equally negative in the fight for social justice.  They may feel powerless and perhaps even disincentivized to say or do anything to make positive change. When one operates from a place of guilt, the potential for embarrassment may weigh more than the risk of failing from a place of power.

According to this article on prospect.org, “Dismantling structural racism does require white people to become more than a little uncomfortable as they both acknowledge and relinquish their power in order to achieve racial progress. But that enlightenment needs to lead to action, not just deeper reflection. Otherwise, it becomes part of the problem.”

I believe that operating from guilt is often analogous to treating an infection with an antibiotic: if you take only enough to make the symptoms subside, the infection will likely come back even stronger. The Blackout Tuesday movement could possibly be viewed as an example of operating out of guilt or shame.  Blackout Tuesday took place June 2nd, 2020 in which participants posted a black box on their social accounts with the hashtag #BlackoutTuesday.  A scroll through your social feeds on this day showcased a sea of black boxes and a quick search of the hashtag #BlackoutTuesday returns more of the same.  But does this show of solidarity do anything to help rectify racial injustice in America? According to Forbes, it does not:

“Before you participate in Blackout Tuesday, keep this in mind: It’s not working.  The images and hashtags are causing communication issues between peaceful protesters and activists, according to social media experts.  A recent report noted how the disruption could actually cause more harm than good.”

The article goes on to say, “The real answer is to inform and educate-to keep the channels open wide and sound the alarms as clearly as possible.”

As I tell my audiences, privilege is a tool in the toolbox of a percentage of any population.  Rather than instill guilt and shame, why not motivate and mobilize those with this tool to use it for good--to pivot privilege into social responsibility? It is not enough to post a black box with the appropriate hashtag, nor is it enough to march in protest. We must pivot our privilege and stand up for anti-racism which entails taking real actions and educating ourselves and others on social injustice. I believe that we should all begin with some self introspection including implicit bias training.

Anti-racism activist Peggy McIntosh famously wrote White Privilege: Unpacking the Invisible Knapsack in 1988, defining the “invisible” privileges of White America.  How can we use this privilege and its associated power in the good fight of racial inequality?

As the Forbes article mentioned, education is key.

Education as Centerpiece of Potential

The best place to foster this is in public schools, as there is no stronger force than education to defeat social injustice and solve the world’s most significant problems.

In this article published by educationpost.org titled, “Here’s What I Wish White Teachers Knew When Teaching My Black Children,” writer and educator Afrika Afeni Mills addresses the gaps in text books and classroom conversations regarding Black history.

She says, “In high school, college and your teacher prep program, you no doubt were taught something about race in America, but it is highly unlikely that you learned the truth about the Black experience. It is likely, for instance, that you’ve been taught little to nothing about the pre-enslavement contributions of Black people to the world, the horrors and impact of centuries of enslavement, post ‘Emancipation’ Jim Crow laws and practices and the many ongoing racially based systemic injustices such as mass incarceration, housing discrimination, wealth disparities and lack of equal access to quality education, health care and more.”

Public schools would serve their students well to incorporate learning materials that provide a full spectrum education on Black history and the Black experience.  Education is the key to the social injustice crisis.

The Use of Privilege by Icons of Social Justice

I often tell my audiences, “True leadership is elevating those below you to rise above you.” This is true now as much as it ever has been, but history gives us some great examples.

Mahatma Gandhi
Gandhi’s prophecy of peace and non-violence continues to impact our world today, over 150 years after his birth.  According to this article by the Huffington Post, “Above all, Mahatma believed in the power of dialogue.”

Nelson Mandela
Nelson Mandela once said, “Education is the most powerful weapon you can use to change the world.”  According to this article by Global Citizen, “Not only did Mandela liberate an entire country from the grips of the racist apartheid system, but he also continued the fight for the world’s most vulnerable people until the very end of his life.”

Mother Theresa
In 1946, Mother Theresa received the call on her life to take to the slums of Calcutta India to tend to the sick and poor.  She is often referred to as “the nun who became a saint,” as she was canonized as Saint Theresa.  She founded the Missionaries of Charity, an organization devoted to her cause of tending the sick and poor around the world.

The Need for Cultural Competency

RELATED POST: Has Coronavirus infected equity in education? Millennials may be the vaccine!

In this previous post, I explain how educators can teach cultural competency.  Educators can help those with privilege understand it and encourage them to think about how they can use it for the good of social justice. The arts and music can be a key way of building bridges between cultures.  In my article The Power of the Arts in School to Foster Peace, I explain how the arts can also be instrumental in helping students find unity and cultivating empathy for other cultures.

As the fight for social justice wages forth, let us actualize the power of our privilege and use that power to educate ourselves and our children to bring forth a better tomorrow.

Be sure to check out Ravi's daily "Minute to Pivot" video series. You can subscribe to it on his YouTube channel by clicking here, or visit any one of his social media pages @RaviUnites.

Ravi recently gave a keynote to the Virginia ASCD association at their annual conference.  It was very well received and he followed that up with a school convocation at Gloucester Virginia public schools.