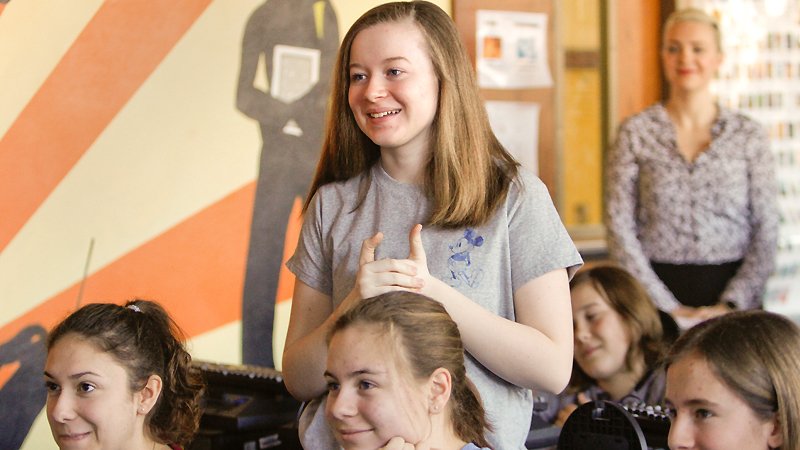 The Ravi Unites Schools initiative kicked off with a spirited real-time audio-video interaction last week. I am so proud to have facilitated another cross-cultural experience for a new group of students. Nearly 50 eighth and ninth graders from two schools—Poland Middle School in Poland, Ohio USA, and Shanti Bhavan Children’s Project in Tamil Nadu, India—discussed what matters to them. For this group, this included their favorite foods and music, to the issues caused by the class and caste systems, to combatting world hunger. I greatly appreciate the enthusiasm and preparation of the students and teachers at each school—they are what makes Ravi Unites Schools a success!

One educator expressed this to me after the event:

“As a school counselor, I am always looking for inspiring lessons and resources to teach character development. Our live video-audio session covered more lessons in 45 minutes than I could cover in months and the students loved it! I highly recommend any classroom or school system to partake in one, it is truly a unique, engaging, inspiring experience for kids and adults. Thank you, Ravi!”

Exchanges like these enable kids to bond naturally, even across miles and time zones. They truly benefit from this cross-cultural peer-to-peer discovery. As we head further into a future that includes globalization, cultural competency is rapidly becoming a required skill. And as access to technology increases in schools, there is no reason why interactions like this cannot happen regularly in classrooms all around the world.

The online meeting began with a short introduction by me. Followed by the first peer-to-peer question, which was posed by a US student: “What is your weather like?” Such a seemingly benign topic quickly revealed several things: degrees in Fahrenheit were converted to Celsius to establish an understanding. Next, it was discovered that what might feel like a warm day in Poland, Ohio could feel frigid in Tamil Nadu, because in general, it is so much warmer there. And while the students in Ohio expressed that they were sick and tired of snow, their peers in Tamil Nadu expressed that they had never seen it in person.

Food-related questions were also revealing. Students shared that, in India, eating beef is against their religion, while many Americans eat it several times per week. On the popular subject of sports, students bonded over basketball and volleyball and explained American-style football and Indian-style cricket to each other.

Then came a big question from the US students: “What one thing would you change in the world?” This sparked discussion about social injustices, including the issues that arise from classism and from India’s caste system. The relatively elite students in Ohio were stunned to learn that they were engaging with peers who are from some of the poorest families in the world. Enough commonalities had already been established between these students for them to recognize that classism has no place in the modern world. This discussion also explored ways that we can combat world hunger by addressing it in our own communities.

The conversation then lightly gravitated back to musical tastes: both groups shared similar preferences for Katy Perry, Justin Bieber, Ed Sheeran and others.

All too soon, it was time to say goodbye. It was obvious that minds had been opened and bonds formed. As for me, I could not be happier with the outcome, which brought me back to the very first online interaction for students I created nearly 8 years ago. Then as now, in less than one hour, students felt a greater affinity with their peers of other cultures and faiths. People are still people, wherever they live; we simply want to get along and learn from each other. There is nothing stopping us from carrying the ball closer to world peace.

If you are a school seeking to participate in a similar interaction between your students and those of another area, please reach out by joining the Ravi Unites Schools Facebook group and posting your interest there. I am committed to helping you facilitate this experience for your students.